Why are Kiwi hepatitis C patients being forced to source their own life-saving medicines from overseas? CATE BROUGHTON reports.
For 17 years, Hazel Heal managed to stave off cancer, liver failure and early death while living with advanced cirrhosis of the liver.

Signing up to buy generic medicines that could cure her was surprisingly easy – and the only option that would not involve selling her house.

The Dunedin mother-of-three had an appointment by Skype with the founder of an Australian "buyers club", Dr James Freeman, posted proof of payment and an authorisation form, then flew to Melbourne. Within a month, she had the medicine in her hands.


Since helping his first hepatitis C patient in February 2015, more than 1000 people had sourced medicine through Freeman, including about 100 New Zealanders.

Under patent law, Gilead was the only company that could make and sell the medicines in New Zealand and Australia.

Freeman said the the buyers club got around it because legislation allowed individuals to import up to 12 weeks of medication for personal use.

The advocate and entrepreneur said his scheme was ethical and legal.

"You can use the law as it is now – which is that parallel imports are allowed to, I guess, circumvent the Gilead position 'we've got the patent so you'll have to pay us $100,000 to get the medicine'," he said. 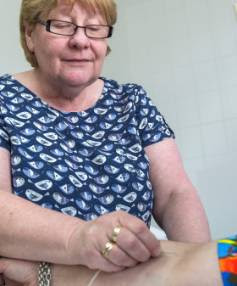 DAVID WALKER/FAIRFAX NZ
Jenny Bourke, nurse manager of the Christchurch hepatitis C Community Clinic, gets a patient ready for a blood sample to test for the virus.

It was impossible for Gilead to sue any of Freeman's patients because they were protected by patient confidentiality under Australian law.
"Even under a court order I would not reveal it because that would reveal a hep C status. With court orders about revealing patient details there is one get out of jail free card . . . and that's if it would be injurious to a patient's mental health," he said.
New Zealand drug regulation agency Medsafe has warned against buying medicines from overseas as "quality, safety and effectiveness can not be assured".
Doctors for Healthy Trade spokesman Dr Erik Monasterio said pharmaceutical companies like Gilead were using their monopoly on patented medicines, such as Sovaldi, to make outrageous profits.
In its first year of trading, Gilead made US$12.4 billion (NZ$18.9b) in profits, despite only spending up to US$400 million on research and development for the drugs, he said.
The high price set for the medicine in the United States, and Gilead's ownership of the patent, would determine the price other governments would be able to negotiate.
An application to New Zealand's drug buying agency Pharmac to fund Harvoni and Sovaldi was under "active consideration", an agency spokesman said.
In 2015, Gilead Sciences Australia New Zealand said in a statement to Stuff that the price for its hepatitis C products in New Zealand was fair.
"The price of Sovaldi and Harvoni is determined on a country-by-country basis taking into account the burden of disease in the country, its economic means and the value of the medicine in terms of its impact on improving overall health outcomes," the company said.
Generic versions of Gilead's life-saving drugs were being produced in India, China and Bangladesh – countries that had not recognised the company's patent, Freeman said.
Freeman's operation tested and capsulated the medicine when it arrived in Australia, and was supported by the Australian Society of Hepatitis and HIV Medicines (ASHM) and many Australian liver transplant units.
For Monasterio, the buyers club option was proof New Zealand's patent laws needed to be reviewed to ensure Kiwis paid a fair price for much-needed medicines.
"The excessive cost of these medications is not justifiable. It's legal robbery."
He said doctors were concerned about the legal implications of supporting patients to access generic medications.
"I don't know what the legalities are if we prescribed them the medications. If we did we may be assisting them to import them in a parallel market and I don't understand the legal implications."
Intellectual Property lawyer Sebastien Aymeric said Freeman's buyers club might be guilty of "contributary infringement" of patent law by giving people the means to get around it.
He said patients might be liable for infringement of patent law, meaning they could be sued, but he doubted Gilead would risk taking such unpopular action.
"What they would get from a court if they were successful would absolutely not outweigh the PR disaster that that would be."
Writing a prescription for the medication for a patient to buy generic medication would probably not been seen as an infringement, Aymeric said.
Auckland transplant physician Professor Ed Gane said the best outcome would be for Pharmac to fund the medicines immediately.

An epidemiological study conducted by Gane and other experts, published in the New Zealand Medical Journal in December, showed delaying funding for the DAAs by just two years would result in an extra 377 deaths from hepatitis C.
Gane said he understood why patients were accessing the generic medication, but he had some concerns about their authenticity.
"You need to be careful [about] where the drugs come from because I think that does affect the authenticity of the medication."
Gilead and other US pharmaceutical companies had licensed generic companies in India to produce the medicines for their local markets.
Quality controls provided by the US companies meant the medicines were just the same as those produced in Europe and America, Gane said.
In contrast, drugs sourced from other countries, including China and Bangladesh, were from facilities that were not under licensing agreements from large pharmaceutical companies in the US and had no need to prove their medicines were the same as those produced in Europe and America.
"So there is no proof that these are authentic drugs."
Gane said the drugs could be contaminated by toxic chemicals, diluted so they had low potency, or fake so they had no effect against the hepatitis C virus.
Another concern was that while generic sofosbuvir was relatively simple to produce, the drug must be combined with another class of antiviral drugs, such as the NS5A inhibitors or protease inhibitors.
The secondary drugs were very difficult to make outside of large facilities found in Europe and America, Gane said.
"It's the combination of the two active drugs that prevents a relapse after treatment."
FACT FILE
- Hepatitis C was discovered in 1988
- It spreads through blood-to-blood contact
- An estimated 150 million people are infected globally, and 50,000 in New Zealand
- It is believed only 40 per cent of those infected with chronic hepatitis C are aware they have the disease

Posted by Online Indian Pharmacy at 10:36 AM